Few days ago Macedonians had a referendum about the change of the name of the country, the majority decided to do it, but there was not the quorum. Now the Parliament has to take the final decision. I am totally respectful of all Macedonians (Fyrom and Greece) and I am not entering in politics, also because my blog is related to my travels. That is why I am going on, I continue to describe my visits to the different places of that beautiful country. Let me call it Macedonia.

This time I want to mention Bitola a lovely city with an institutional imprinting. I wrote the title of this post thinking about the history, because the city was well know for the presence of more than 100 Consuls. It happened during Ottoman Empire, when in the place became last capital of Ottoman Rumelia, from 1836 to 1867. It was the second European city of the empire after Thessaloniki.

This aspect is of course a small part of all the history of Bitola, started in the 4th century BC, with the name of Heraclea. So the “City of the Consuls” had a great past and now there are some prehistory objects and monuments to be admired. Despite some witnesses of the different periods, the city was built, destroyed and rebuilt many times. Actually going around for the streets it is possible to see many buildings made with European style. There was a covered bazaar, but the fire destroyed it in XIX century. There is one more new and it is interesting to go there and to visit the shops with a cobination of modernity and tradition.

It has also to be mentioned the local park, big, peaceful and full of statues of the most famous people of the area, mainly related with the culture and the art, as poets, writers, painters and so on. But I have to proceed with some order so I can explain better what I like the most and to suggest to you, my dear readers. Let’s make a list: Shirok Sokak Street, Heraclea, the Clock Tower and the local Museum. These are the main places that I visited and I liked i, but I will write few linea also about mosques and the most important churches of the city. In the end there will be some notes about accomodation and restaurants.

When I arrived in Bitola I started a walk in front of the theatre, a modern building that host also the cultural centre where are organized time to time expositions. From the small square there is the entrance to the carsija, the old part of the town with the traditional shops and where the life is concentrated. Going ahead on Shirok Sokak Street, a pedestrian way to the big park of Bitola where locals are going to spend their free time, especially families with kids and young people because of the discoteque located in a part of the park.

Starting the exploration of this beautiful area of Bitola it is easy to notice the elegance of the neo-classical buildings, most of them used by Consuls in past and quite well conserved. Today there are shops, because it is the shopping street, offices and apartments. As usual in the down town there are a lot of bars and restaurants located on the pedestrian street and few hotels. I guess their number is increasing also because it is one of the cities preferred by tourists.

The Stara Čaršija of Bitola is a great example on how it is possible to restore and preserve the ancient buildings and setting and use them for the modern society. They combined trendy bars and shops and adapted them to the need of XXI century. In general it has to be said that the speed of Macedonia is slower than western Europe, also if there are well prepared people who are working hard to improve the country. In one side this is positive for the growth of the country, but in the other side I guess it should be an example and don’t follow the Western Europe lifestyle, time to time too fast and with less values. This is only a point of view that has no relation with my travel experience in Bitola.

This monument is a landmark for Bitola, built in 1830, the same period of the Orthodox Church of St. Demetrious, the Clock Tower is now the way for inhabitants to check the right hour and of course it is an important monument for all visitors. Bitola as a vocation for tourists, maybe because it was used since the past to be a cosmopolitan city. The tower is located in the center in the norther part of the main street and very close to Magnolia Square, the place where most of the local attractions are located.

In the beginning there were bells, but in 1927 it was decided to substitute the people in charge of ringing the bells with a clock. Thanks to a German mechanism it was possible to ring the bells in the different hours and shows to the people the exact time. In the years the mechanism was restored and improved and now, since 1970, the Clock Tower is one of the 180 in the world to use that system.

A couple of kilometres far from the actual Bitola it is possible to see the remains of the Greek city of Heraclea Lyncestis, ruled by Romans. The ancient civilizations built the important centre and new there are witnesses of the buildings and of the way of live at that time. The site is well kept and the archeologist worked hard to recover many elements, as the beautiful mosaics done during Byzantine period, when it was built a big and important basilica, discovered during the II World War time. 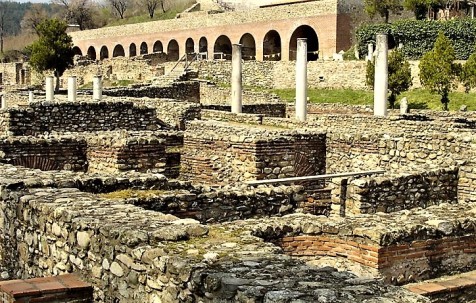 To mention the basilica is necessary, because the city founded by Philip II of Macedon in the IV century BC was chosen as an Episcopal seat. Some of Heraclea bishops present in early Christian era were part of synods in Serdica. The religion was a feature of the ancient centre, abandoned in VI century AD after a big hearthquake and an invasion made by Slavics.

Who has a passion for history can not miss the chance to visit the Bitola Museum dedicated to Mustafa Kemel Ataturk, the guy who made Turkey the modern and great country. The main elements are related to the history of the 1920s-1930s, so there are a lot of connections between Macedonia and the Ottoman Empire. Inside there are military finds, but also many ancient objects.

Do not worry, the recent history is just a part, even do very important, of the local museum, infact who visits it can explore all the history of the country, since the origins. Jewels, objects of daily life, costumes and many other things can be found in the permanent and well curated exposition. Archeology is the feature of some rooms, so I suggest to go after a tour in Heraclea. They need to improve the lights in order to show better the collections, but it is a very good museum.

As I wrote at the beginning of the post in Bitola there are different Orthodox churces and mosques. They were built in different periods, also if most of them are recent because of the different vicissitudes of the city, destroyed and rebuilt many times. I want to mention Isaak Kadi Mosque because it is one of the oldest religious structures still used in Bitola.

The mosque is entitled to an important Turkish person part of a well known family that left Anatolia to live in Bitola during Ottoman Empire. The guy went to study in Istanbul and he got a lot of success, so to celebrate his position in the society he decided at the beginning of XVI century to build the mosque. Now it is considered a cultural monument of Macedonia. It is few steps from carsija, where there was the old covered bazaar.

Where to eat and sleep

There is a famous and very nice hotel, called Epinal, at the entrance of the main street, but it has a casino and I preferred to choose a more quiet accomodation 150 metres far from it. The Hotel Ambassador is a four star structure located in a small street close to the theatre. It is quite modern in the setting and also it has a contemporary equipment to give to the guests what they need.

The apartments are spacious and they offer a room, a separated lounge and a very nice bathroom. It is not so big, but the kind staff is going to assist the guests in every need. They have also a bar where they serve a huge breakfast in Macedonian style, that means to have a big quantity of salty and sweet food.

In the city there are a lot of traditional restaurants around the centre, so the best way is just to follow the instinct and enter in the preferred ones. The prices are quite cheap, especially for “Western standards”. If you want anyway an elegant restaurant where to taste delicious local recipes presented in a very innovative way, you can reserve a table at Gradska Kafeana. It is the restaurant of the Hotel Epinal.

Bitola is the perfect Macedonian Consul to welcome the tourists.